What do I do if I find termites in Sydney?

If you are really concerned about what you have found, you should give Jim’s Termite & Pest Control a call straight away on 131546. Even if you aren’t sure, call us, because it is better to be safe than sorry when it comes to termites.

When you find termites in your Sydney home a lot of people get very upset and think that the termites have eaten their whole home and just don’t know what to do. The first thing that you should do is to ring you local Jim’s Termite & Pest Control technician as they will be able to give you great advice on what to do.

The most important thing that the technician will tell you to do is not to disturb them. They may ask you to take a photo of what you have found and send these through to them for identification but other than that you should leave them alone.

The reason for this is that it makes it easier for the Sydney Jim’s Termite & Pest Control technician to correctly identify the species of termite you have. There are hundreds of termite species in Australia and in Sydney we have the second, third and fourth most destructive termites in Australia.

What do I do if I find termites in Sydney on a weekend or after hours?

If you get home from work or are relaxing on the weekend and you suddenly find termites then please don’t panic or worry that you won’t be able to get someone out straight away to look at your termite problems.

In Sydney we have technicians available 7 days a week and our call centre is open from 8am to 8pm daily. You can also enquire online at anytime and a message will be sent to the technician as soon as you have enquired.

Most of our Jim’s Termite & Pest Control technicians will take calls and ring clients as soon as they receive the details as they understand how shocking and upsetting it can be to find termites inside your Sydney home.

If required our Sydney, Newcastle and Wollongong technicians will also come out to assess what you have found and discuss the best options on dealing with the termites you have found. 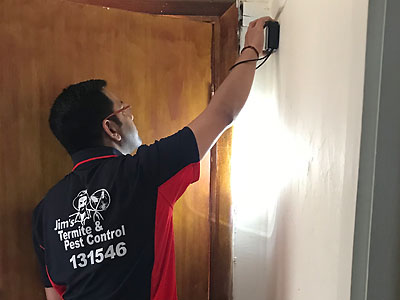 What if I have disturbed the termites I have found

If you have panicked, smashed or torn a hole in your wall and have disturbed them, then do your best to cover this area up and make it as dark as possible. Termites are very sensitive to light and if the area is under attack they may leave the area unless it is covered up and made secure.

In November 2012 a Jim’s Termite & Pest Control client in Sydney had ripped a 1 meter hole in the wall after they found termites in their home. The technician that took the call asked them what they had found and then gave them instructions on what they needed to do until they arrived on site.

They were asked to cover the hole up with towels or a blanket or some plastic garbage bags to seal up the area and stop the termites from leaving the area. The client listened closely to what the technician said and did exactly what he had asked.

When he arrived on site one hour later he was able to locate a small pocket of termites just under where the hole was created. Within a week he had the termites happily feeding on the bait provided and in 6 short weeks he was able to totally eliminate the colony. 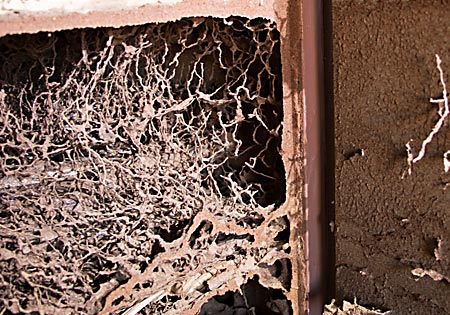 If you have found termites in your Sydney home and don’t know what to do, then give our friendly understanding staff a call on 131546 and they will get a local technician to give you a call or come out and look at what you have found. You can also enquire online 7 days a week.